"Profound, insightful... Nothing is taboo...the script surprises the audience from beginning to end and is so truthful... I loved Eggs." 5 Stars, Female Arts Magazine.

A  five star dark comedy about female friendship, fertility and freaking out. By Florence Keith-Roach.

To watch a trailer of Eggs at the Vaults Click Here.

TO WATCH A  FILMED PERFORMANCE  OF EGGS AT THE CRESCENT STAGE, THE VAULTS, FEB-MARCH 2016 CLICK HERE

For more features, interviews and reviews go to Press. 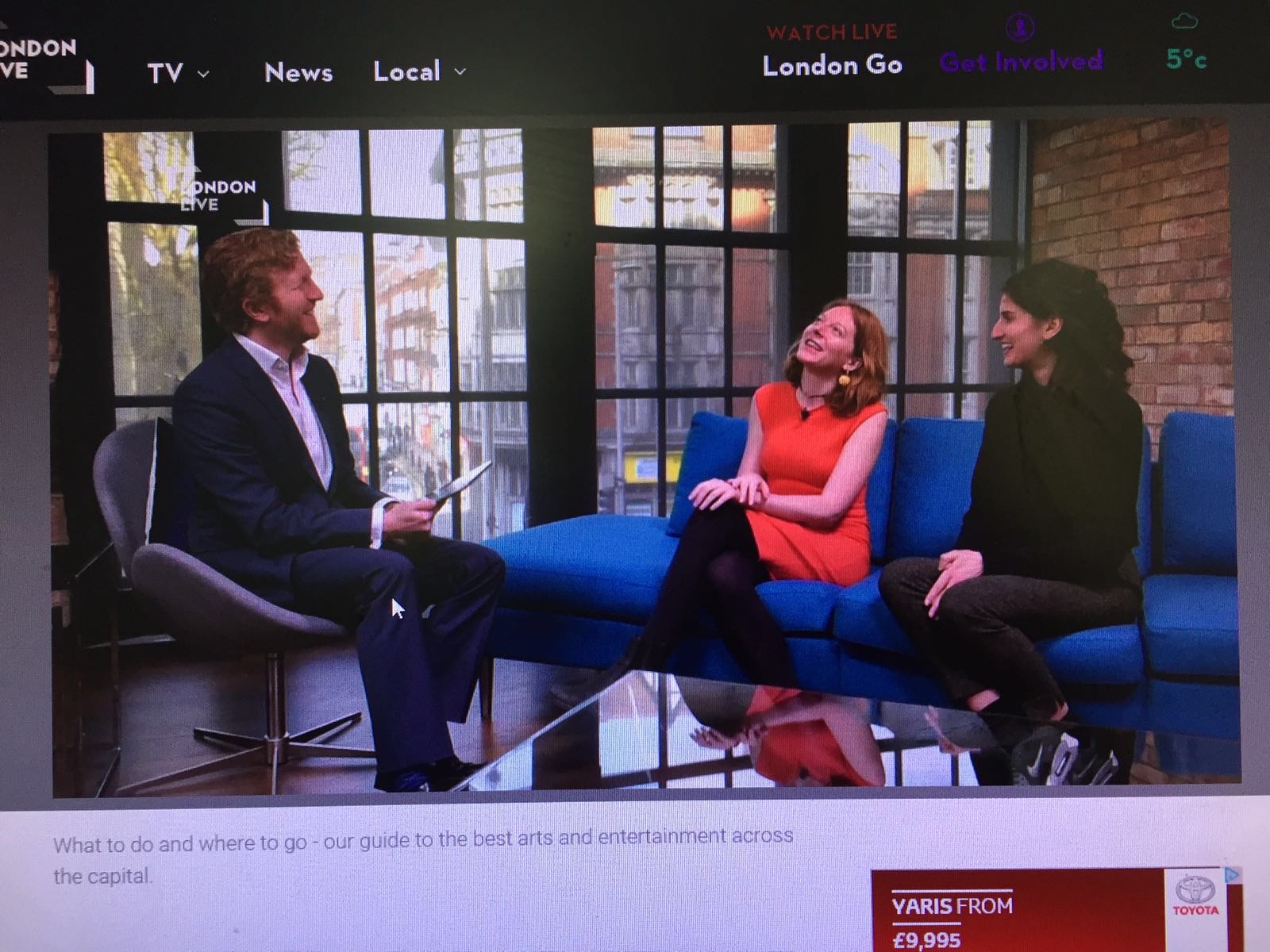 EGGS, is a dark comedy about female friendship, fertility and freaking out, by Florence Keith-Roach.

This newly developed version,opened at the VAULT FESTIVAL  on the Crescent stage. 24th Feb-6th March, 2016.

"Keith-Roach a playwright and actress worth keeping an eye on." Litro Magazine.

“They say that most crimes are performed by sexually frustrated men on a largely sugar based diet.

I eat a lot of MAOMS"

A dark comedy about *female friendship*, *fertility* and *freaking out*.

Though friends from university, GIRL 1 & GIRL 2 are living very different lives. The only things left that unite them are their struggle against society’s expectations, a love of 90s dance music and a mounting alienation.

Over the course of a year, the tension of this realisation mounts and the wilfully humorous banality of their dialogues, so reassuring at first, begins to grate against a far more sincere and ultimately tragic subtext.

For this is a story about coming to terms with the absurd horror of one’s own fragmentation in the world. A world where the untimely death of a friend, IVF, pop-feminism, Scarlett Johansson, MDMA and Cher’s 90s comeback album all chaotically co-exist.

In the end, it is their friendship, however flawed, which rescues these women from utter alienation. This play celebrates these relationships, for all their bickering and sardonic glory.

Eggs has been chosen to be published in an anotholgy of five plays at the Vault Festival. A copy of this anthology is availaible to buy here:

Orphee Productions is a female led collective dedicated to telling stories that challenge gender disparity. we are hosting a series of talks and workshops for schools, universities and charities, addressing some of the themes raised in this play. If you would be interested in hearing more about these, or to book a talk, please do get in touch.

We hosted a talk in association with SURGE TALKS  with Sarah Berger, founder of So and So arts.

With very special thanks to Maud Dromgoole, director and dramturg of Eggs in Edinburgh 2015. 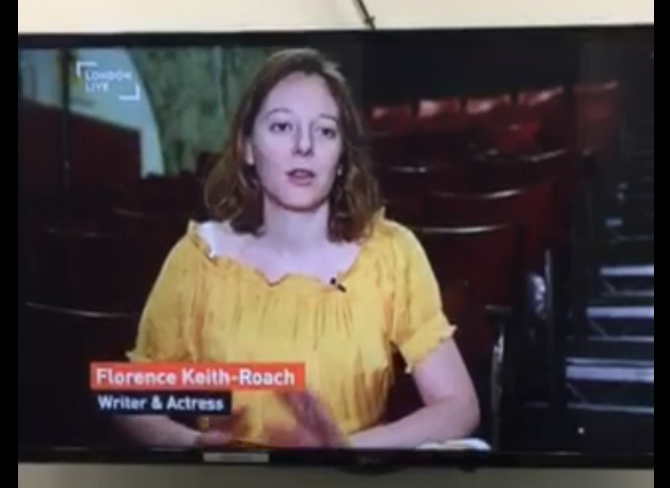 "Profound, insightful... Nothing is taboo...the script surprises the audience from beginning to end and is so truthful... I loved Eggs." 5 Stars, Female Arts Magazine.

"The satirical observations are so well-made that we find our laughter tinged with nervous self-examination at almost every point." 4.5 Stars, The Reviews Hub.

"tender and delicate—Eggs is worth the price of admission, and Keith-Roach a playwright (and actress) worth keeping an eye on." Litro Magazine

To read an interview with Florence Keith-Roach about Eggs in Resident Magazine; Click Here.

To read a feature about EGGS in A Younger Theatre; Click Here. 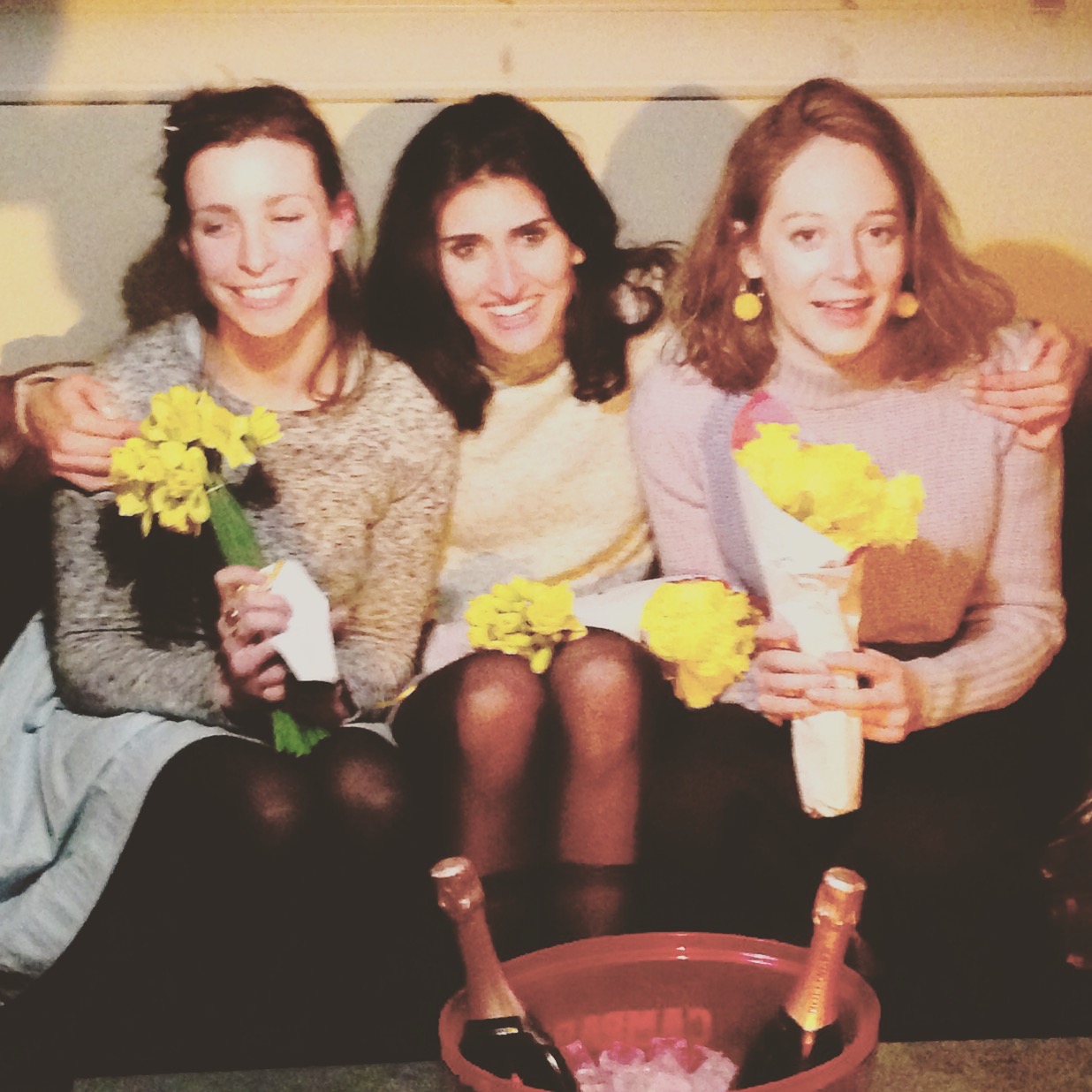 Eggs could not have happened without the support of some generous donors. See the programme below for details. 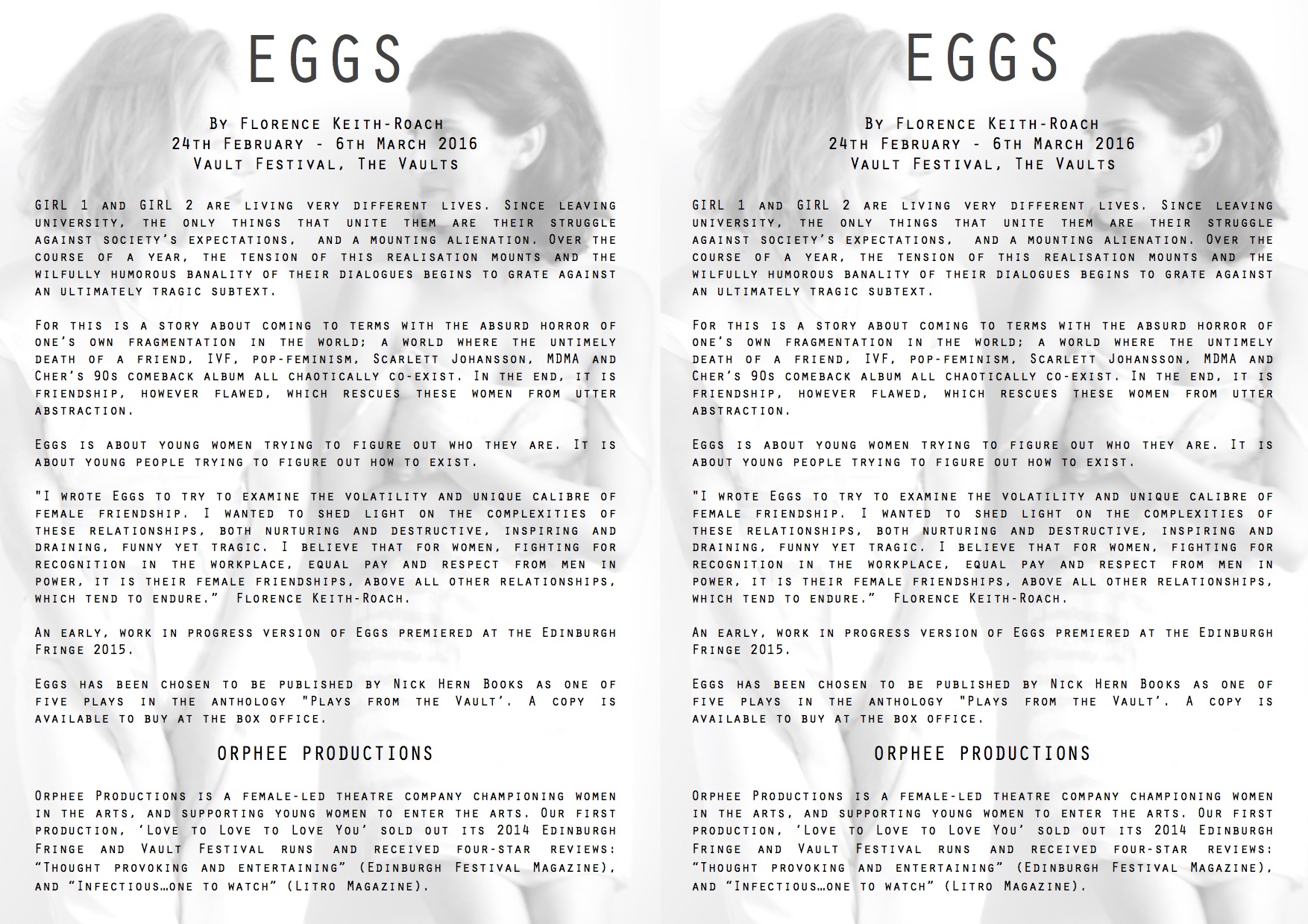 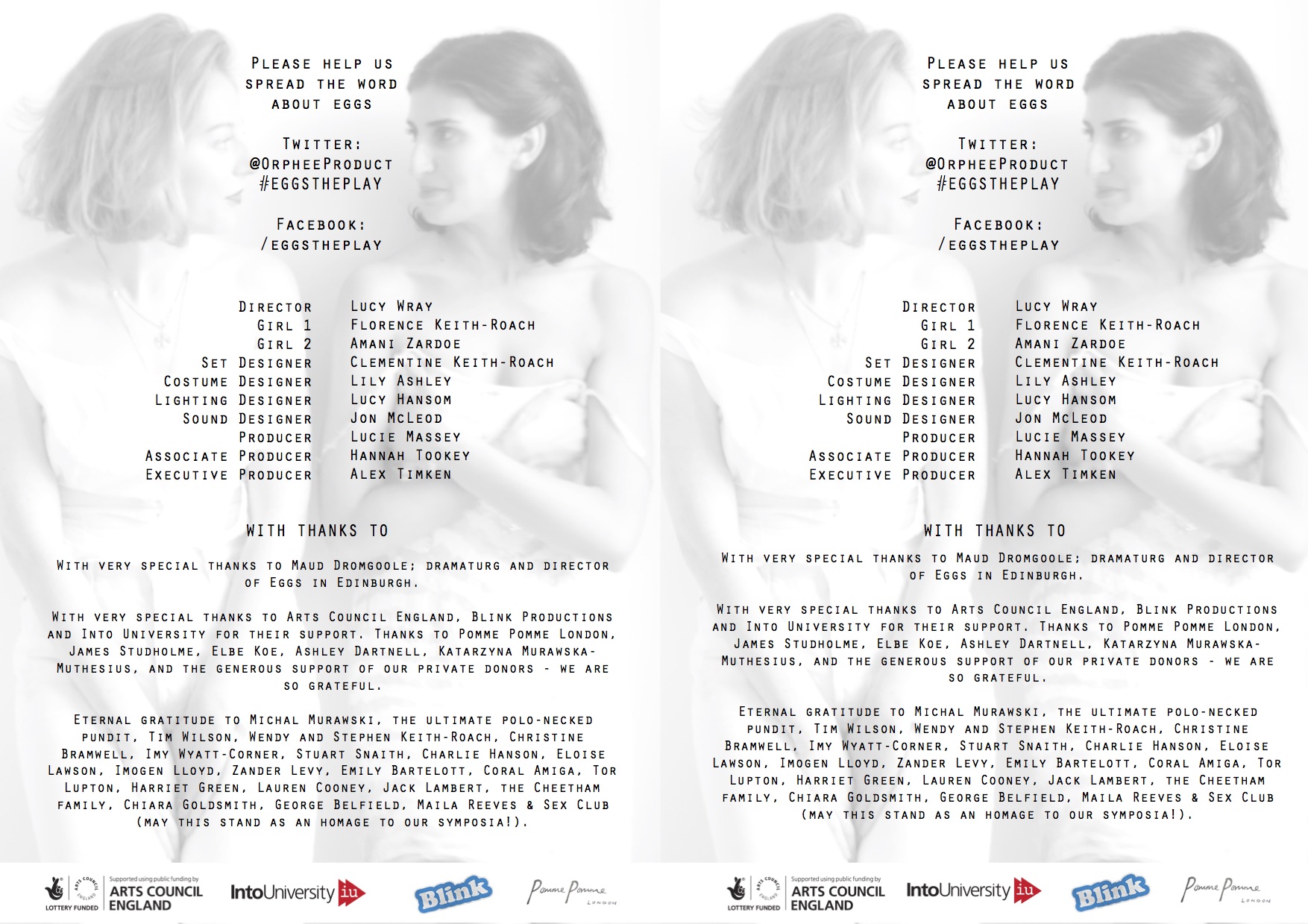 TO READ MORE ABOUT EGGS AND FOR ALL PRESS. CLICK HERE.

To read an interview with florence Keith-Roach about Eggs and its VAULT FESTIVAL run:  CLICK HERE 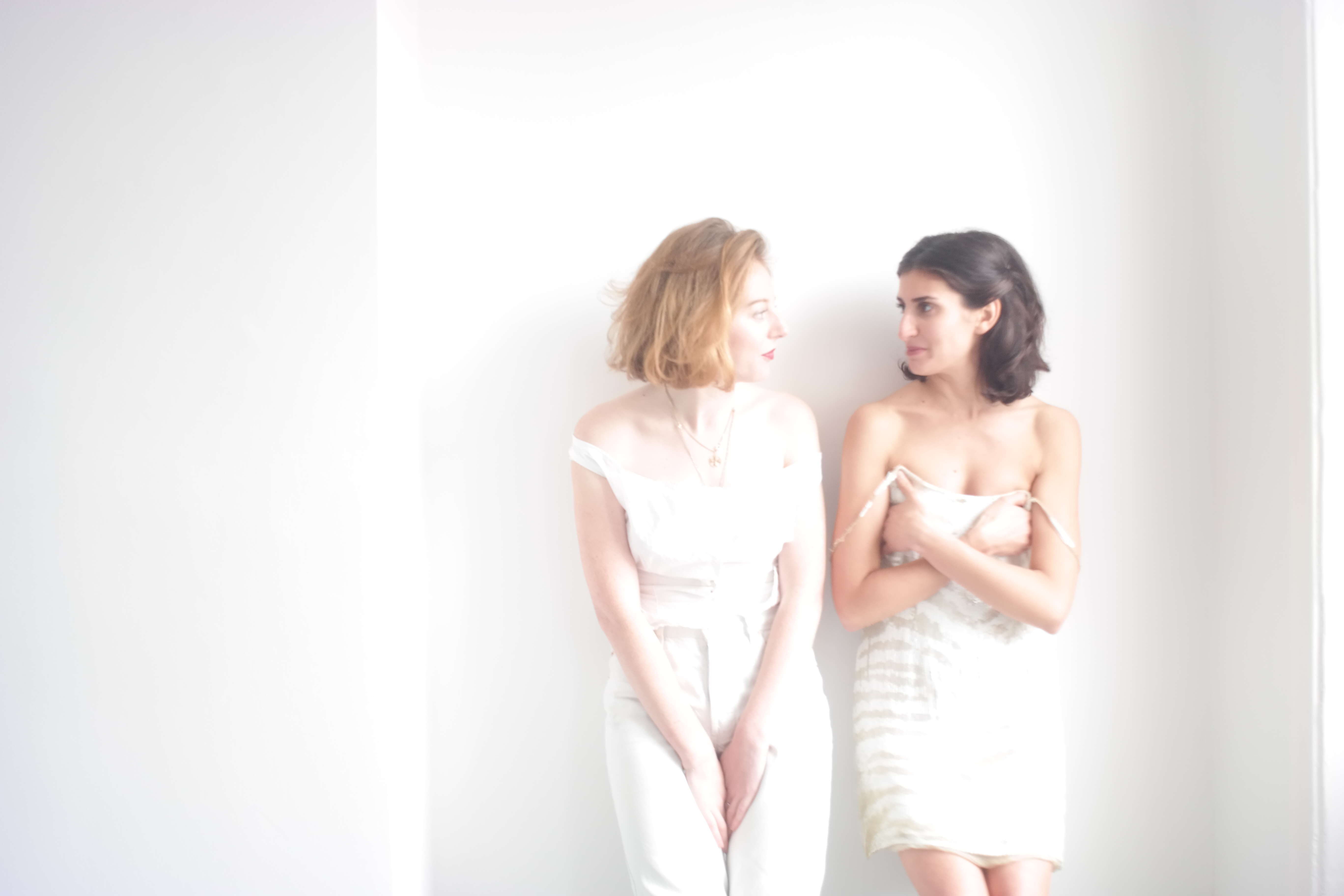 EGGS has been chosen by Nick Hern Books to be published in an anthology of the five best plays at VAULT Festival.  To preorder a copy click here. 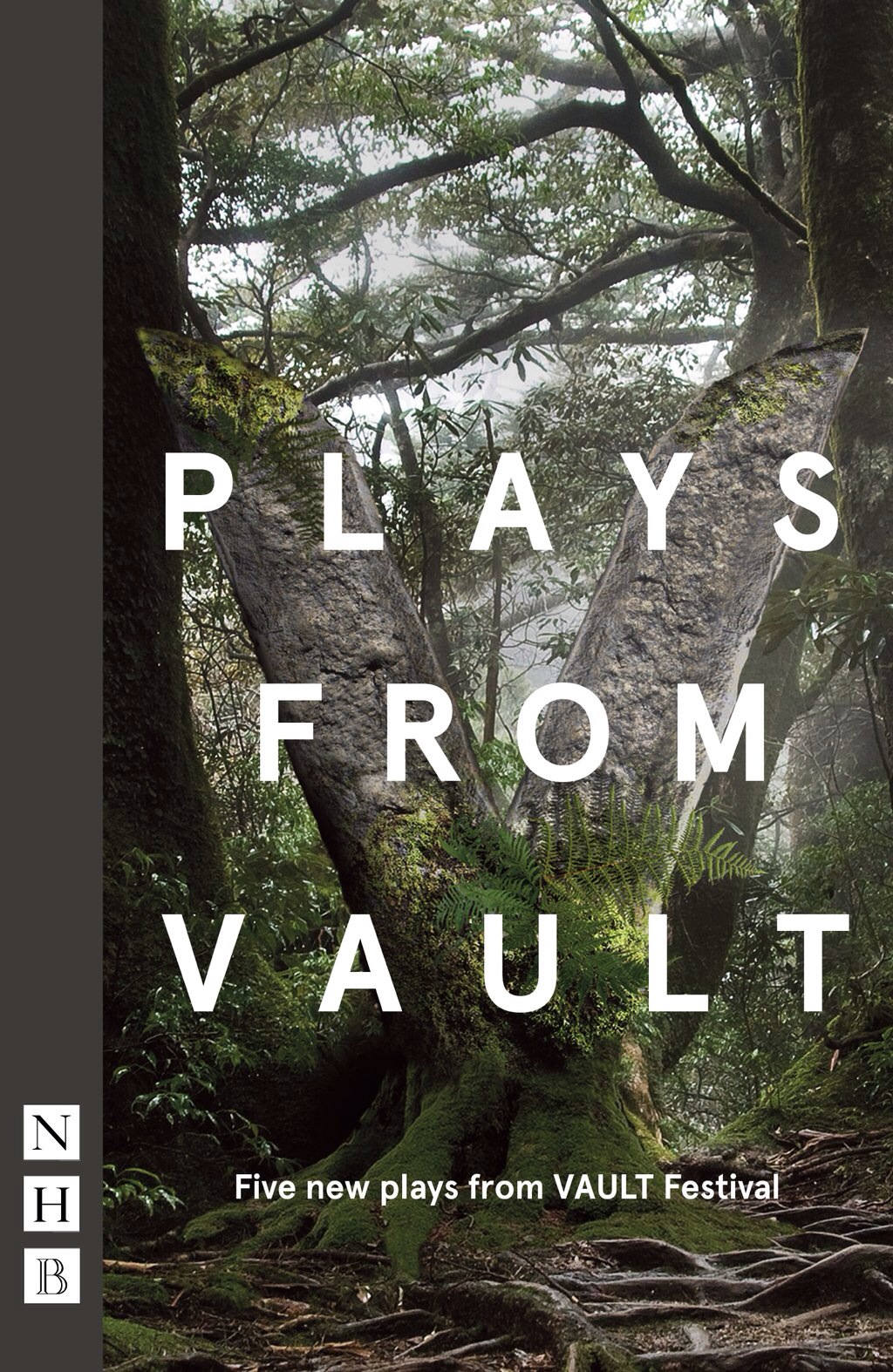 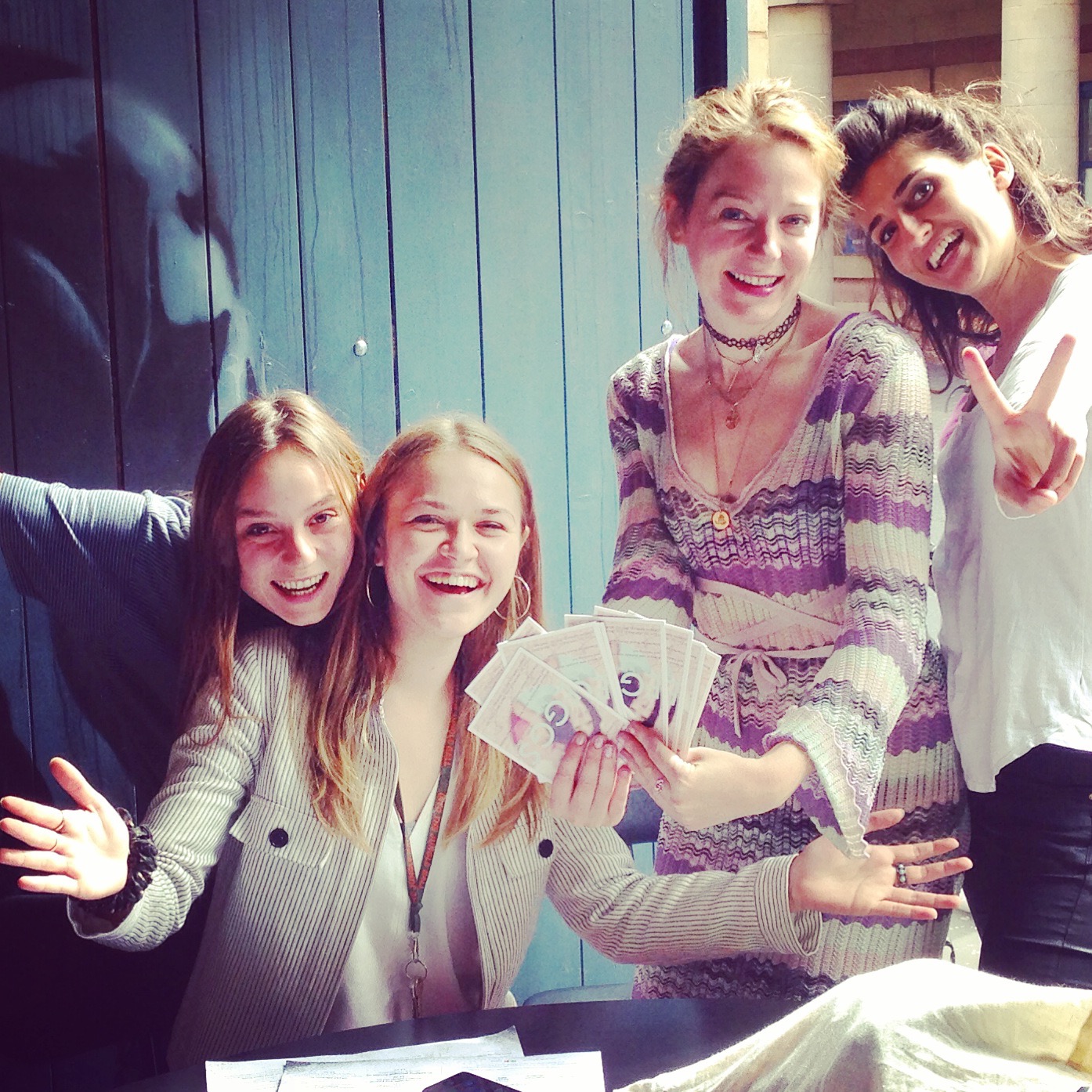 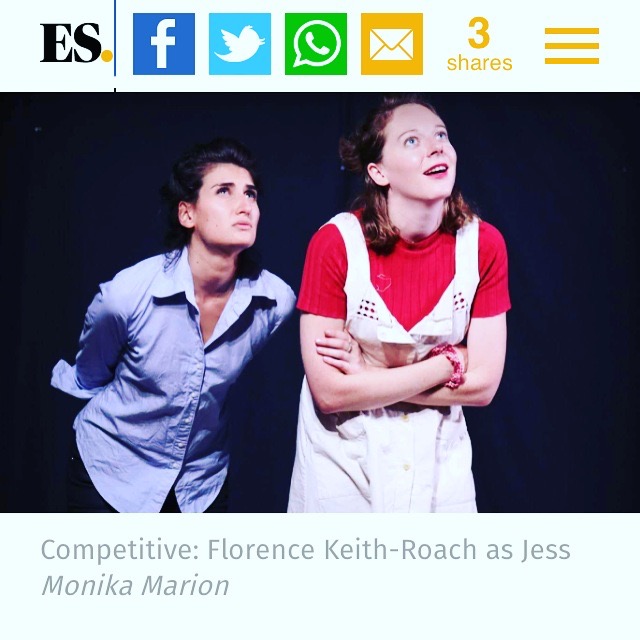 The genius of her work is simmering away; in a few years your ticket stub will be the kudos you saw her concoction of sex, drugs and lonely disco here first.” (5* Broadway Baby).

“Refreshingly unabashed… a serious and heartfelt work…playwright Florence Keith-Roach is a rising star… her fellow actor, Amani Zardoe, is clearly one to watch too.”(Fringe Guru)

Eggs attracted hundreds of audience members, many of whom reviewed the show on twitter. Some of these extraordinary responses are recorded below.

And also #EggsThePlay which made me laugh/cry in recognition/horror/glee. A delight to sit with such wit & cheek & good company for an hour

If you're at #EdinburghFestival make sure you see @Florencesahara in #EggsThePlay - totally brilliant!! 5 stars and free!! Go go go!

So, #eggstheplay this morning was brilliant. Best thing I've seen @fringe this year! And it was FREE, which seems mental. Go and see it!

Attempts On Her Life @AOHL_EdFringe15 Aug 10

TO FIND OUT MORE ABOUT EGGS AND IT'S UPCOMING PERFORMANCES, CLICK HERE.